Review: Alice Cooper, with one of the tightest bands in rock, triumphantly returns to Clearwater 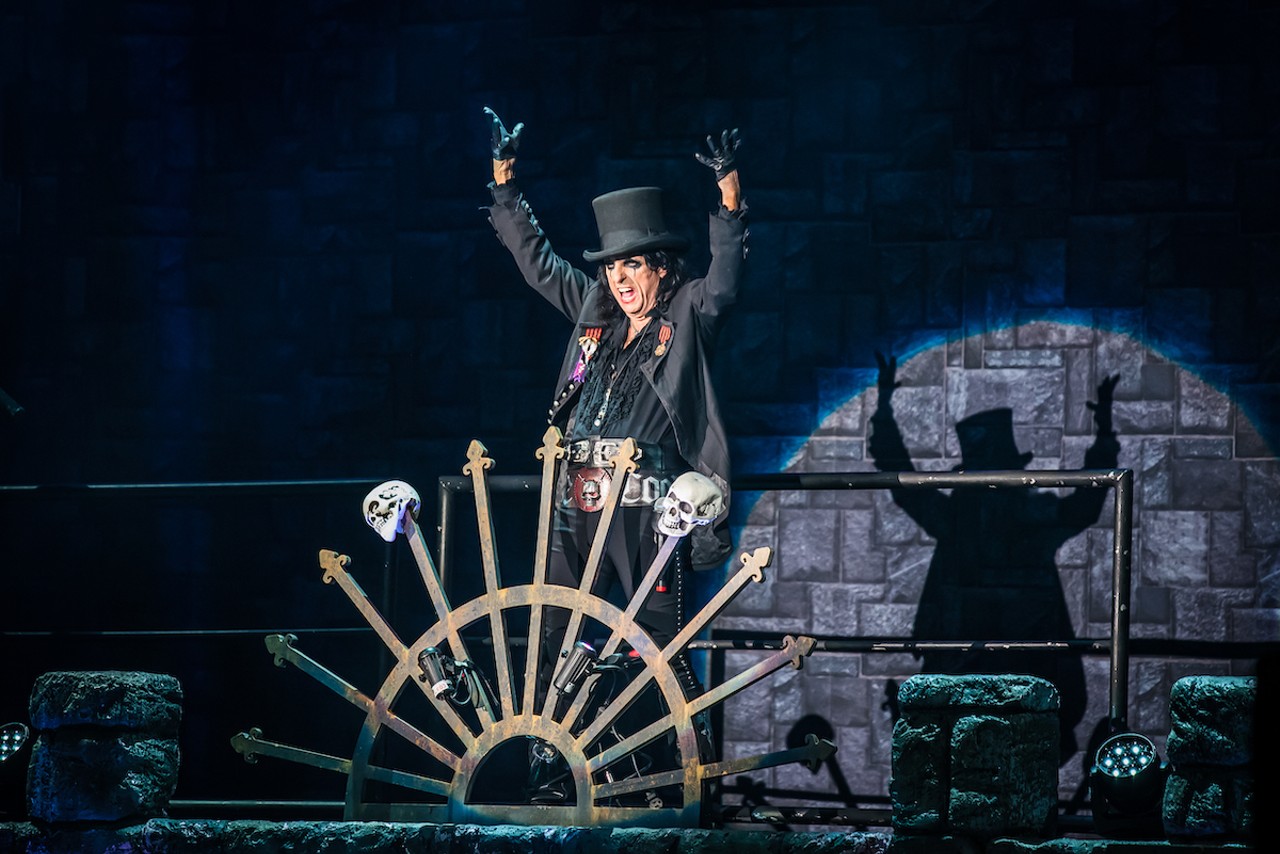 I only got a page worth of notes at Alice Cooper’s Monday night show at Ruth Eckerd Hall. It’s not at all because there was nothing interesting to talk about, but the current tour promoting last year’s Detroit Stories is running more or less the same setlist from before COVID-19 was a thing.

While the 74-year-old king of shock rock does generally tend to shuffle his setlists around with different tours, he must really enjoy the one he put together for 2019’s “Ol’ Black Eyes Is Back” tour. And who could blame him? Since conception, the list has remained a healthy mix of hits for the casual fans (“No More Mr. Nice Guy,” “Poison”) and for those who dug deeper into his career (“Teenage Frankenstein,” “Bed of Nails”). Not to mention that Coop has hands-down the tightest backing band in rock right now.

From the moment the curtain with Coop’s glowing black eyes fell to the opening notes of “Feed My Frankenstein,” to the last chord struck on the confetti-draped “School’s Out” finale, the backing band was more than willing to take part in the theatrical side of Cooper’s production. Honestly, it’s almost a sin that these guys don’t have a name to use alongside Alice Cooper’s. Think about it: There’s Bruce Springsteen and the E-Street Band, Red Nichols and the Five Pennies, Jordan Esker and the Hundred Percent…you get it. In terms of tightness, not many can compare to the mighty E-Street Band. But even with heavy consistency in the setlist, at least 100 shows a year, and three guitarists with different playing styles, Cooper’s band is at the top of the list.

Take guitarist Tommy Henriksen, for example. In a recent interview with Creative Loafing Tampa Bay, Cooper compared Tommy’s playing style to Slash’s. He’s a Hollywood Vampire, has appeared on every Alice Cooper album since 2011’s Welcome 2 My Nightmare, and he spends most of his time in Switzerland. His boss made sure to include him in a few one-on-one style moments that included just the two of them. Before “Fallen In Love,” Cooper played a few riffs on a harmonica, and Tommy would repeat after him on his red Gibson SG. Much of the time, he would turn it into a 15-second improv section where he would one-up the boss’ harmonica work. Later, he would receive a—most likely—staged and inaudible pep talk from Cooper before his solo on “Under My Wheels,” which every guitarist onstage gave individual takes on.

When Coop and company are off the road, drummer Glen Sobel works as more of a freelance artist—having only appeared on Cooper’s live albums. Sobel plays in house bands, appears on other artists’ albums, and even filled in for Mötley Crüe drummer Tommy Lee for a few dates in 2015, when he had to sit out a few dates due to an injury. Glen was already playing with opening act Cooper, so why not? Regarding his latest appearance in Clearwater, there’s always a segment where Alice is offstage, getting all straitjacketed up for his impending execution scene (“Steven,” “Dead Babies”), and before he’s dragged out, the five-piece band does an instrumental jam session featuring a handful of tunes from Welcome To My Nightmare. In the middle of “The Black Widow,” Sobel broke out into a four-minute drum solo, twirling his drumsticks around, pedaling the bass drums, and never breaking the slightest sweat. Bassist and Beasto Blanco member Chuck Garric joined in near the end of said solo, using the hell out of the wah-wah sound effect on his bass for a solid minute.

Then, there’s the band’s shredder, Nita Strauss, who every Alice Cooper fan should be familiar with. She has recently been killing it with her solo projects, being the first female since 1995 to have a top 10 single on Billboard’s Top 10 Mainstream Rock Airplay chart. During almost every guitar solo from Jimmy Page-style guitarist Ryan Roxie and Tommy Henriksen, Cooper—in a tongue-in-cheek fashion—signaled them to shut up. But every time Nita ripped something out—whether it was her pre-“Roses on White Lace” solo she did while wearing a solid black veil, or playing her model Ibanez JIVA10 steel-pedal style while spinning around and around, Cooper shut his mouth and backed off. And it wasn’t to be a gentleman: It’s because with Eddie Van Halen gone, she’s now one of the most well-versed, living shredders in the world. Not to mention the fact that she apparently took a tumble while onstage. It was so unnoticeable, yet during band introductions that came later, Coop referred to her as “agile,” which completely went over most of our heads. That’s how amazing of a performer she is.

You can’t forget good ol’ Vincent Furnier. 74 years old, a head full of long, black hair, and a man of many jackets—from red to strait. His raspy vocals powered through deep cuts such as “He’s Back (The Man Behind The Mask)” and a few new songs from Detroit Stories, including “Go Man Go.” Just for Clearwater, he even presented a few tour debuts: 1971’s “Be My Lover” has only been played a handful of times since 2018, as was “Lost In America.”

View the gallery at CLTampa.com