Alice Cooper Picks Jeff Beck As His ‘Rock God’: He Is ‘Still The Most Creative Guitar Player Out There’ 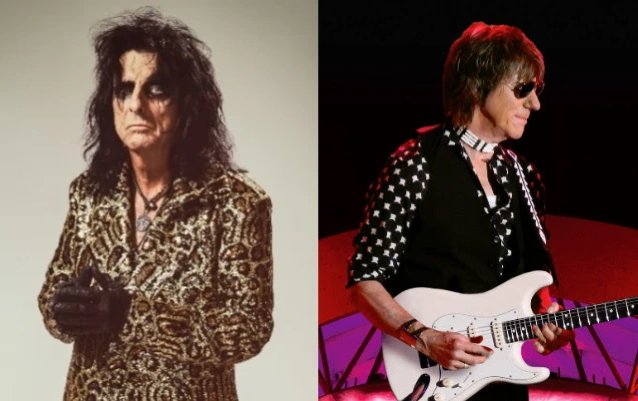 Alice Cooper was the featured guest on BBC’s “The Rock Show With Johnnie Walker” during the “Rock God” segment. Cooper picked legendary guitarist Jeff Beck and stated about his choice: “Jeff Beck, I think, is still the most creative guitar player out there — ever since THE YARDBIRDS and even before, maybe.

“We actually opened for THE YARDBIRDS when we were 16 years old, 17 years old. We were THE SPIDERS in Phoenix. And they couldn’t have been much older than us; they were probably 19 or 20. We were THE YARDBIRDS band in Phoenix — still in high school. And we got up on stage — [there were] a thousand kids there — and we played all THE YARDBIRDS songs. And they were in the back. And I could see Jeff and I could see Keith Relf and all the guys. Every time we finished a song, they’d give us a thumbs up, ’cause we were pretty good; we actually did their songs pretty good. And then they got on stage and blew us off the stage, because they were THE YARDBIRDS.

“I’d never seen anybody play guitar like that — so cocky,” he continued. “And at the time, you can imagine, he was showing off as much as he could and he was amazing. And the guitar looked like it had been dragged behind the bus for years — an old Telecaster with big chips out of it, and everything — and he made that thing sound like a Stradivarius. Since then, I’ve seen him play with Eric Clapton at Madison Square Garden. And, of course, I’m a friend of his. And on top of it, he builds ’32 Ford Roadsters. How do you beat that?

“Johnny Depp and I were both backstage here in Phoenix talking to him, and while he’s talking to us, he’s just noodling on the guitar. And what he’s playing should have been recorded, ’cause it was just, like, perfection.

Named for the city that launched the original Alice Cooper group on the road to success, “Detroit Stories” follows 2019’s “Breadcrumbs” EP as a modern-day homage to the toughest and craziest rock and roll scene there ever was.

“Detroit Stories” was recorded with producer Bob Ezrin, mostly in Royal Oak with Detroit musicians and featuring a mix of original material alongside covers of songs by Bob Seger, the MC5, Mitch Ryder’s DETROIT and OUTRAGEOUS CHERRY.